The Otto-Dix-City of Gera is the perfect place to enjoy art and culture. During a tour of the city, you will discover the Renaissance Town Hall and the City Pharmacy with its magnificent Renaissance bay window. The Haus Schulenburg designed by Henry van de Velde, the traditional Theatre, the Cultural and Congress Centre, and four museums.

The Geraer Höhler is located 10 m below the Museum of Natural History.

This accessible subterranean labyrinth has served as beer storage since the 16th century.
During a Black Beer Tour (Schwarzbiertour), you can experience exciting things about Gera’s underworld, while enjoying a local treat, Gersches Fettbrot, and Köstritzer black beer.

Discover the historic district of Untermhaus.

ART IN THE OTTO DIX HOUSE

The famous painter and graphic artist Otto Dix was born in Gera Untermhaus.

In his birthplace, you can experience the ambience of a workers’ house around 1900 and look at some of his art works. A further exhibition of his paintings can be found in the nearby Orangerie.

The Marienkirche in Untermhaus is one of the oldest churches in Gera. Its history dates back to the time around 1200. A particularly precious jewel of this church is her late-Gothic wing altar consecrated in 1443.

The Theatre am Theaterplatz 1 is one of three houses in Gera. It has a theatre hall with 550 seats as well as a concert hall with 812 seats, and is part of the Theatre and the Philharmonic Thüringen. The theatre offers you a varied schedule from different disciplines such as opera, operetta, musical, concert, puppet theatre, classical and modern ballet all year round. 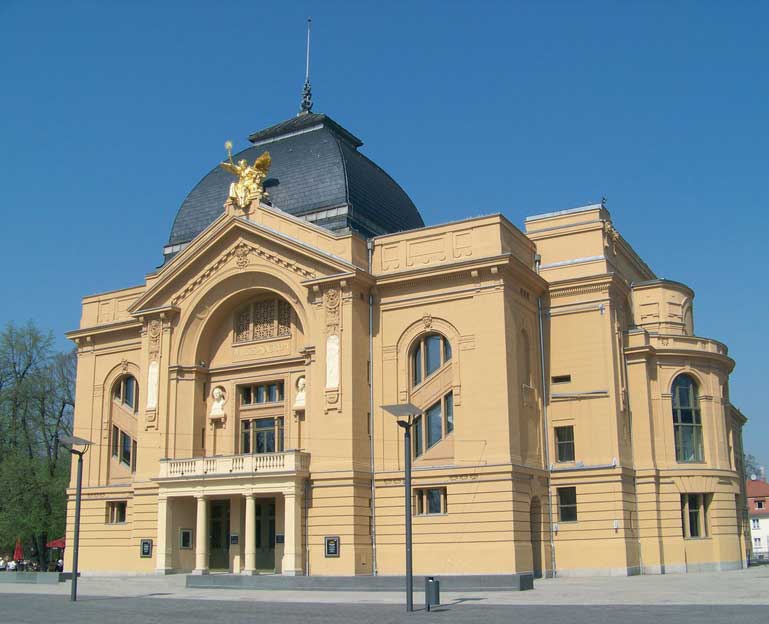 The orangerie is a baroque building. It forms the western end of the kitchen garden in the Untermhaus district. Since 1972, it has housed the art collection Gera with some works by Otto Dix.

In the Hofwiesenpark, you have next to the Hofwiesenbad and the stadium possibilities for a walk, jog or to simply relax. The beautifully designed playground and miniature golf courts are perfect for families. In the summer, events for young and old take place on stage. Whether pop concerts or folk music, it is always an experience.

In the 16th and 17th centuries, the former castle was rebuilt into a stately Renaissance palace. In the most serious bombing of the US Air Forces on Gera on April 6, 1945, the castle was destroyed and burnt down completely. Only the just burnt-out keep was later restored and received its current conical tower dome. For climbing the Schlossberg to the tower, you will be rewarded with a fantastic view over Gera.

The dahlia garden is a green area in Gera, which was founded in 1928 as the first pure show garden for dahlias worldwide.
Today, the only Dahlias nursery `Paul Panzer ‘ from Dahlienstadt Bad Köstritz, which remains in Thuringia, delivers the dahlias for the dahlia garden every year. For the Dahlienfest (celebration) on the last weekend in August, the audience chooses the most beautiful dahlia.